The third mode of design thinking is Ideate.  During this process, I did some brainstorming and incubation in order to develop more ideas about my Problem of Practice in order to consider later in developing the design even more.  Take a look at the brainstorming session I conducted with my peers and the notes from the incubation process below.

Part One of Ideation:  Do a Brainstorm Session

My brainstorm session took place during one of our grade level team meetings and the few days following the meetings.  First, I briefed my peers on my Problem of Practice and what I was hoping to accomplish by the end of the project.  I asked them to help me brainstorm ideas about what lesson ideas we could replace worksheets with.  I told them to imagine that we had endless resources in order to redesign our math curriculum; there was nothing too far out there that wouldn’t be considered.  We threw out a few ideas during our meeting, but time didn’t necessarily allow for much more, therefore I asked them to take some time and think about any other ideas they could come up with and send me those ideas as they came in.  I then took those ideas and created a Stormboard that would visually show the brainstorming process and ideas that everyone came up with.  As I began getting more ideas come in, I posted those to the board and shared it with my peers, hoping that once they saw the ideas of others, that would spark new ideas of their own as well.  I was right!  They came up with some really great activities that could be incorporated into our math curriculum, specifically the unit on Money.   You can see our Stormboard below. 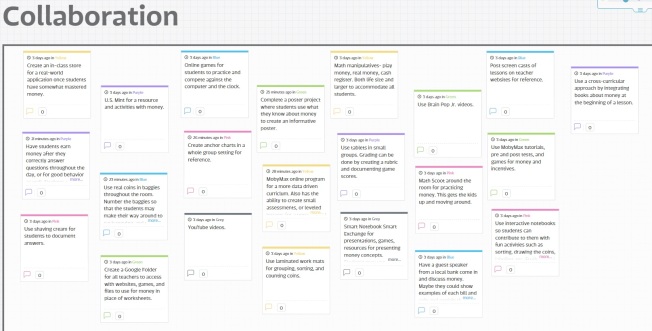 I used Evernote as the format for my Incubation Journal to take notes as something came up regarding my Problem of Practice project.  As I wrote my notes, I added some of the ideas to the Stormboard above.  My notes are below.

Part Three of Ideation:  Reflect on the Ideas

I enjoyed this stage of the process and felt like it was very applicable to my daily life in that any time I am looking to expand my ideas, I look to others.  Ideas that are thrown out by others tend to spark even more ideas of my own, which, in the end, creates a better final product.  I found it easier during the brainstorming process, and ultimately later on in the prototype stage, to focus in on one particular unit for redesigning rather than the entire math curriculum.  I also found out that my brain works better and develops quality ideas when I take a break from whatever I am working on and come back to it later on.  I thought the incubation process was a little more difficult than brainstorming just because of my busy lifestyle.  I had to decide on a note-taking method that was handy and available to me on the go.  I also found that I do most of my thinking at night, while lying in bed rather than during the hustle and bustle of life’s daily routines.  I am looking forward to the prototyping stage in order to filter some of my ideas and put them into curriculum form, and ultimately being tested by my students.

This work is licensed under a Creative Commons Attribution-NonCommercial 3.0 Unported License.